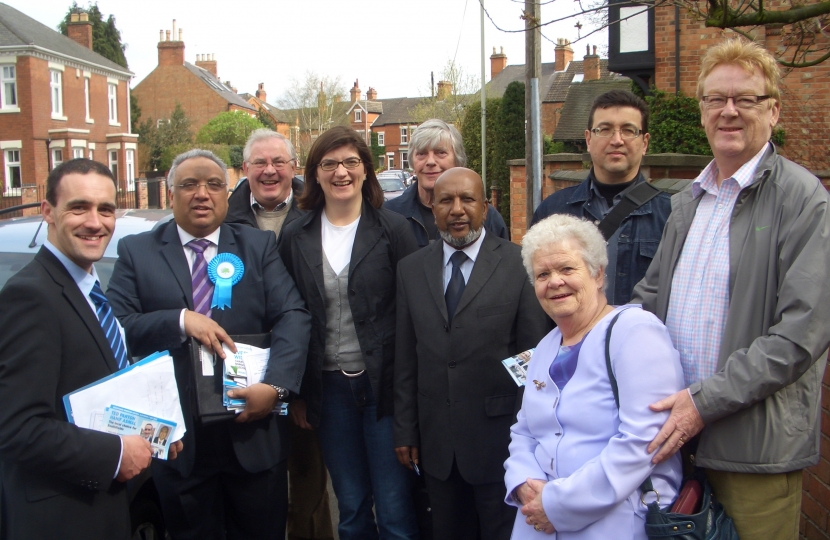 Both votes are equally important but in very different ways.  I will mention the vote on AV later.  First, I want to explain why I hope you will vote Conservative on Thursday, if you haven’t already done so by post.

I believe that if a group of people have run something well and effectively they should be given a mandate to continue to do so.  Charnwood Borough Council, under the ruling Conservative Group, has been extremely well run over the past four years.

Financially, total Borough expenditure has been reduced from £20.8million per year to £17.5million.  Our council tax rises have been kept to a minimum at all times.  The story under the previous Labour-run administration was very different and it has taken time to put that right.  This is exactly what Labour did to Britain – don’t let Labour do to Charnwood’s budgets what they did to our national economy.

As importantly the Leader and Cabinet have shown real vision across our Borough – by, for example, working to deliver the Eastern Gateway project for Loughborough and by renovating the Old Magistrates Court for use by local businesses and the voluntary sector.

Charnwood Council has also been leading the way in working in partnership with other organisations such as the police and Charnwood Neighbourhood Housing.  This has resulted in safer neighbourhoods and reduced crime.

There are lots of challenges ahead including the need to support our local businesses, including AstraZeneca as it closes its site, ensuring continued regeneration for Loughborough town centre and working to deliver a bus station and making the most of our links with the 2012 Olympic Games.

Charnwood Conservatives are the only ones to have clearly published a local manifesto – which can be found on this website.  It was published in late March so you could see what you would be voting for.  I am not aware that any other political party in the borough has done this.

Charnwood Conservatives have an excellent team of candidates standing – they are a real mix of ages and experience and want to represent you.  I know from campaigning with these candidates across the whole of my constituency that they would all make fantastic councillors.

My final point is this.  You very kindly elected me to be your MP last year.  Since then I have found that often the most effective way of achieving results for constituents is to work, as necessary, with other tiers of Government to achieve maximum results.  At the moment you have a Conservative Government, a Conservative MP in Loughborough and a Conservative County Council.  Please ensure that Charnwood Council, by having a Conservative Cabinet, keeps its clear and strong voice to all of those different levels of Government.

Finally, a word on AV.  I will be voting “No” on Thursday.  There has been lots of huffing and puffing in the national referendum campaign on both sides.  At the end of the day I think it comes down to the fact that we now have a simple system in Britain where at General Elections the candidate with the most votes wins.  Why should this be changed so the candidate who initially came, say, second or third wins?  And why does Britain want to adopt a system which only three countries in the world has and one of them wants to get rid of it.

Thank you for reading and I really do hope we can count on your support in both votes on Thursday.

With every best wish