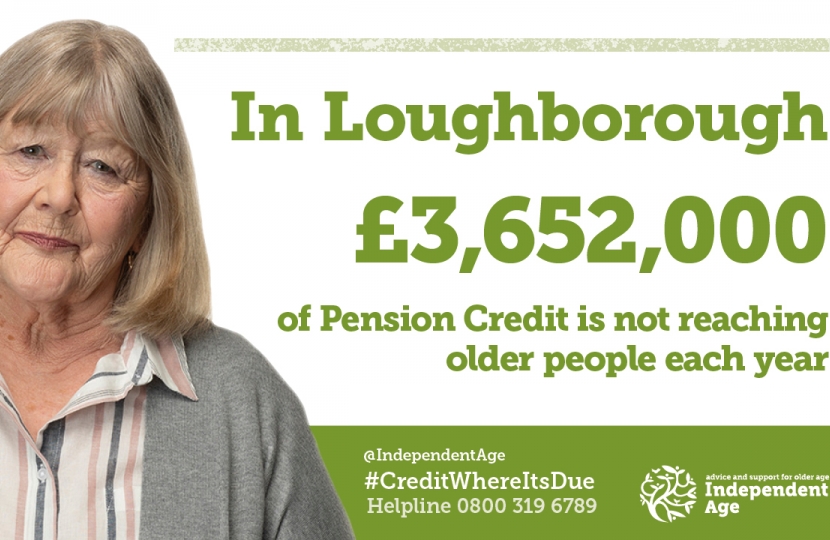 Nicky Morgan has joined forces with Independent Age, a charity dedicated to giving older people advice and support, to support their important campaign urging older people to claim benefits that they may not be aware they are entitled to.

The ‘Credit Where It’s Due’ campaign has been launched to highlight Pension Credit to the large number of retired people who may be missing out.

The charity believes that up to 40% of eligible pensioners are going without the benefit that is designed to raise the least well off out of poverty.

Across the country it is estimated that there are around 1.3 million ‘pensioner households missing out’.

Nicky said “Every older person has the right to live in dignity in their senior years. Pension Credit helps to ensure that the least well off amongst us can do just that.

“It is estimated in Loughborough alone that 1,528 older people are missing out on money that they are entitled to, around £3,652,000 a year.

“It’s vital that we raise awareness of Pension Credit with older people until we get to a point when everyone who is entitled to the benefit receives it.”

George McNamara, Director of Policy and Influencing at Independent Age, said “Over 1500 pensioners in Loughborough continue to miss out on an average £49 a week each in Pension Credit because the system doesn’t work for them. This support could offer a vital lifeline and mean they don’t have to choose between food or fuel.

“We’re delighted that Nicky Morgan is supporting Independent Age’s Credit Where It’s Due Campaign and we’re calling on the Government sets out a comprehensive action plan to ensure that every older person gets the Pension Credit they’re entitled to.”

Claiming Pension Credit is easy. If you are a pensioner living on a low income - £167.25 weekly for single people or £255.25 weekly for couples – then please telephone the Pension Credit claim line on 0800 99 1234 and an adviser will help you through the claim process.